The neighboring towns of Ridgway, Ouray, Ophir, Rico and Norwood offer more affordable housing options than exist in Telluride and Mountain Village.  Each has their own unique character.

Ridgway, coined “Gateway to the San Juans,” is a former railroad stop on the Uncompaghre River.  Steep forested mountains and cliffs surround Ridgway on the south, east and northwest, and the river runs through town and flows into Ridgway State Park and Reservoir.   The town enjoys spectacular views and adjacent Log Hill Mesa provides many housing opportunities along with the Divide Ranch & Club golf course.

Ouray is famously known as the “Switzerland of Colorado.”  Located 60 minutes from Telluride via Highways 145, 62, and 550, or only 17 miles via the four-wheel drive only Imogene pass (but plan a lot longer than an hour!), its character is very similar.  Nestled amongst 14,000 peaks, and at the gateway to the Million Dollar Highway leading south to Durango, Ouray boasts many historic structures, a quaint downtown area, and a large public hot springs.  Established a century ago as a mining town, Ouray retains a rich history with many historic features.

The historic town of Ophir is located 15 minutes from Telluride in Ophir Valley and offers privacy and peacefulness from the hustle-and-bustle that is Telluride and Mountain Village.  One of its prominent features is the Ophir Wall, a popular climbing route. Neighboring Ames is the site of the world’s first commercial systems that generated and transmitted alternating current electricity for industrial use to power the Gold King Mine located in Gladstone above Silverton.

Located 30 minutes from Telluride over Lizard Head Pass, Rico was settled in 1879 as a silver mining center in the Pioneer Mining District.  Small and cozy, laid-back Rico’s amenities include several merchants, the Rico Hotel, various other accommodations, and several restaurants and shops. A wide variety of outdoor activities are available in the surrounding area.

Nestled atop Wright’s Mesa at 7,000 feet, Norwood has spectacular vistas of high alpine and wild desert country. Far horizons are ringed by the La Sal Mountains in the west, the Uncompahgre Plateau to the north, the San Juan and San Miguel Mountains in the east and, to the south is Norwood’s own jewel, Lone Cone Peak. Rugged desert canyons etch the landscape between. Equestrian and agricultural heritages are deeply interwoven in the lives of Norwood’s residents. Cattle drives are common and summer hosts the largest monetary rodeo on the Colorado Pro Rodeo Association circuit. Norwood’s abundance of outdoor opportunities, mild climate, and relaxed atmosphere make it one of the Four Corners’ and Colorado’s best-kept secrets. 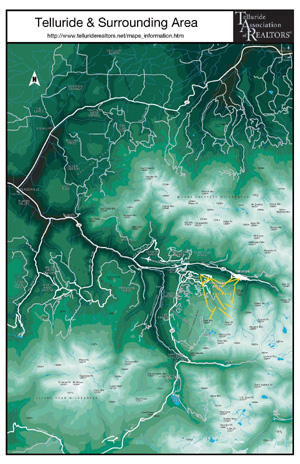